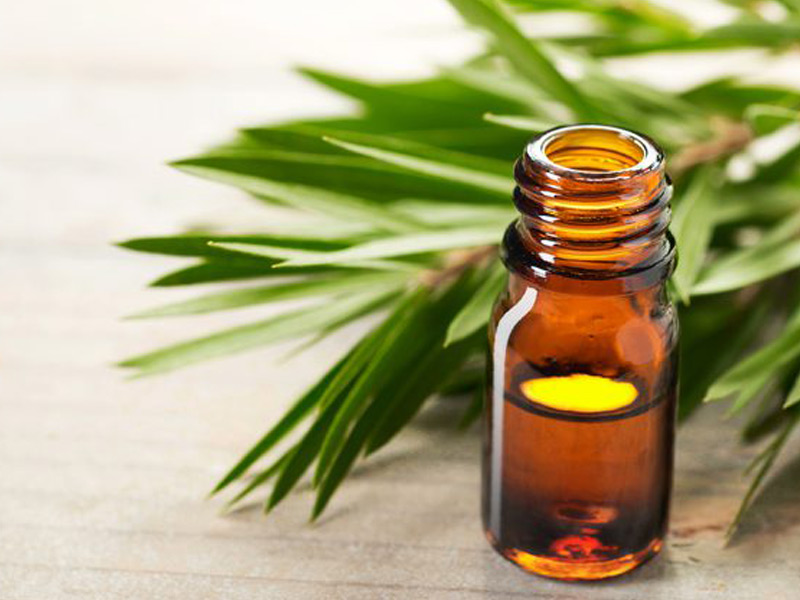 The health benefits of Tea Tree or Melaleuca Essential Oil can be attributed to its properties as an antibacterial, antimicrobial, antiseptic, antiviral, balsamic, cicatrisant, expectorant, fungicide, insecticide, stimulant and sudorific substance.

Unlike the name suggests, the essential oil of Tea Tree is not extracted from the plant commonly associated with tea as a beverage. Neither is it related to Tea Oil, which is extracted from the seed of the Tea plant. Instead, it is extracted through steam distillation of twigs and leaves of Tea Tree, which has the botanical name Melaleuca Alternifolia. The tea tree is native to Southeast Queensland and New South Wales, in Australia, which is why it is such a common and popular essential oil in that country. However, its impressive qualities have spread to other parts of the world, so it can now be found internationally.

The main constituents of Tea Tree essential oil are Alpha Pinene, Beta Pinene, Sabinene, Myrcene, Alpha Phellandrene, Alpha Terpinene, Limonene, Cineole, Gamma Terpinene, Para Cymene, Terpinolene, Linalool, Terpinenol and Alpha Terpineol. This tree is native to Australia and its oil has been used and known among the original inhabitants of that continent as a cure-all medicine since ancient times.

The reputation as a cure-all given to this oil is not an exaggeration. Tea tree oil can be used as a cure for almost all tropical infections and diseases. You name it and it has some sort of positive effect or treatment for that disease. It is invariably found in almost all households of Australia, particularly those that have small children. The magical healingand disinfectant properties make it a wonder drug that also boosts your immunity. However, it is not meant to be ingested, and is poisonous. It is meant for topical application only.

There is so much more to tea tree essential oil than a boosted immune system and a protective agent for your skin; let’s explore some of those other invaluable health benefits below.

It is said that when Mother Nature creates a disease, she also creates the cure. The activity of microbes, bacteria, viruses and fungi are at their peak in the Tropics, so most of the medicinal plants to treat those dangerous things are found there too. Tea tree is one such plant. It can cure some of the most horrible and dangerous bacterial infections found in the tropics. Wounds, which are prone to contracting bacterial infections in this region, can be effectively cured and protected using this oil. This oil is seldom taken orally, but if you do, it should be in mild concentrations. It can cure internal bacterial infections such as those in the colon, stomach, intestines, excretory system and urinary system. It can also be used in treatment of tuberculosis.

The essential oil of Tea tree has balsamic properties that generally boost health. It promotes the absorption of nutrients from food and gives protection from diseases as well, meaning that overall it is a positive addition to our lives.

The Cicatrisant property of this essential oil makes it heal wounds quickly and protects them from infections. Furthermore, it can help neutralize or diminish the scar marks and after spots left by eruptions, boils, pox, and acne.

Microbes don’t stand a chance against this oil, since it is a highly effective antimicrobial substance. It can kill and keep away certain microbes (protozoa) which are responsible for causing severe tropical fevers and malaria.

Melaleuca oil is almost always associated with the skin in some way, because it has powerful antioxidant properties that can significantly improve the appearance of blemishes and scars. Many people struggle to eliminate age spots and other beauty marks, but the powerful antioxidants found in melaleuca oil can quickly remedy those issues, leaving your skin looking young and smooth. In fact, melaleuca oil can even help reduce the appearance of wrinkles as we age.

Viral infections are very hazardous and are frequently recurring, since viruses can survive under very harsh conditions. They can bear unimaginable heat, cold and even poison, because they develop a protective shell called a “Cyst” around them. Some viruses are intelligent enough to develop a new cyst each time they are activated, like the Common Cold Virus, in order to trick our immune system. They never die naturally and can live dormant (neither alive or dead) for hundreds or even thousands of years. They can be killed only if their cyst is ruptured using a particular compound or if they are subjected to extreme heat which is beyond their tolerance. The Tea Tree Oil helps rupture this cyst in some viruses and can give protection against them. It also helps cure viral infections like the common cold, influenza, mumps, measles, and pox.

People who are suffering from cough and cold, congestion, bronchitis and other troubles associated with colds, are sure to get relief using tea tree essential oil. It provides relief from cough, cold, bronchitis and congestion. It can be rubbed on the chest and inhaled while sleeping, or a drop can be placed on the pillow so it can do its magical work at night, and you can wake up feeling much better in the morning.

The stimulant property of tea tree essential oil can be very beneficial for taking care of certain hair conditions. If you suffer from dandruff or hair loss, simply apply a diluted amount of tea tree essential oil to your scalp. The increased blood flow that you experience will help your follicle stay healthy and strengthen the hold on your hair, so you won’t suffer from premature hair loss. Also, since the skin will become healthier, it will be easier to keep moisturized, reducing the amount of dandruff and dry skin.

It is obvious that an essential oil that is so deadly for bacteria and viruses will be effective against insects as well. Tea tree oil is an efficient insect deterrent and insect killer. It does not let parasites and other insects like mosquitoes, fleas, lice, or flies come near someone who has rubbed some of this oil on their body. It kills internal insects and worms too, such as intestinal worms like round worms, tape worms, and hook worms, because it can be absorbed by your body and skin.

This essential oil has a stimulating effect on hormone secretions, blood circulation, and most importantly, on the immune system. It boosts immunity and acts as a shield against many different types of infections. That is why it is quite popular in aromatherapy, because not only does it blend well with many other oils, it can also provide you with internal benefits that would otherwise be impossible, since you are not allowed to ingest tea tree essential oil.

Besides infections, another cause of disease is an accumulation of toxins in the body. These toxins are generated by the body itself, formed as a by-product of various reactions, or they get inside the body in some way. Our body has certain mechanisms to eliminate these toxins. One of them is perspiration or sweating, which has the its advantages, including removing toxins, moistening the skin, opening pores on the skin and keeping the body cool. Tea tree essential oil, being a sudorific substance, increases sweating and promotes the removal of toxins like uric acid. It also helps remove excess water and salts from the body, while cleaning the pores. This further prevents the occurrence of acne, for which tea tree essential oil is often recommended.

No matter where you live in the world, hygiene is important, but particularly in hot places where sweat, heat, and activity can make for some ripe smells. Melaleuca oil is frequently included in the composition of deodorants, as it can act as a powerful deodorizing agent, eliminating not only the smell of body odor, but also the bacteria and toxins that can increase its potency.

Melaleuca oil is safe to use topically on almost every part of the body, including the ear canal. For people suffering from ear infections, particularly children, it can be a painful and confusing time. Dropping a few drips of melaleuca oil into the ear can clear out the infection thanks to the natural antibacterial nature of the oil, and it can even reduce pain and speed the healing process, easing what can often be a long and painful illness.

Many people suffer from severe skin conditions, such as psoriasis, eczema, and the dreaded acne. Acne results from oil glands remaining unregulated and marring the surface of the skin, often becoming inflamed when the sebum glands get infected or blocked by toxins and dirt. Melaleuca oil can quickly clear up the sebum glands and eliminate the bacteria, resulting in smoother, healthier-looking skin in a surprisingly short amount of time.

Tea tree essential oil can provide relief from muscular pain, aches, and sprains because its strong chemical properties can work as an anti-inflammatory and also encourage blood flow to a specific area (being a stimulant), which speeds up the healing process and increases the rate of new tissue and cellular growth.

A Word of Caution

Although there are no inherent risks of topically applying tea tree oil, in some rare cases, people may be overly sensitive to the oil, as a form of a minor allergenic. Melaleuca oil is clearly a powerful cleansing agent for better health, but it is also extremely powerful and should not be directly consumed. This is meant as a topical agent, and should not be trusted as an antibacterial agent when consumed orally. As with any new herbal remedy being added to your health regimen, speak to a trained medical professional before making any major changes. However, there have been numerous reports of people who accidentally consume tea tree oil, and this should be strictly avoided. The side effects of consuming tea tree essential oil can be quite serious, and they include confusion, hallucinations, drowsiness, coma, unsteadiness, severe rashes, vomiting, diarrhea, general weakness, stomach upset, blood cell abnormalities. This should always be kept away from pets and children.

Be sure to TURN OFF POP-UP BLOCKER before checking out.

The only information we save on this site is Your User ID, Password, Order History, and your Addresses.  We do not save credit card or Paypal login information.  We will never share your information.